More Than 3,000 New Voters Have Registered In Ferguson Since Mike Brown’s Death 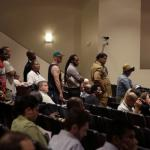 Voter registration jumped 30 percent in Ferguson, Missouri between August 9 — the day unarmed teenager Michael Brown was fatally shot by Officer Darren Warren — and September 30. As protests and clashes with police continue, the town’s residents want to see more race representation in their local government in the near future.
Approximately 3,300 citizens in the town of 21,000 registered to vote after Brown’s death, totaling two-thirds of new voters in St. Louis County. Currently, 5 of 6 Ferguson council members are white, but roughly 70 percent of the city’s population is black. And Ferguson’s mayor is white Republican James Knowles.
Recent voter registration is due, in large part, to community efforts to boost civic engagement. Organizations like the NAACP and League of Women Voters, in addition to sororities and fraternities, are actively involved in registering the city’s residents. Other community members are handing out registration cards for voters to mail them in.
But some are not pleased with the surge of registered voters. In August, Matt Wills, the executive director of Missouri’s Republican Party, denounced protesters’ voter registration efforts, saying, “If that’s not fanning the political flames, I don’t know what is. I think it’s not only disgusting but completely inappropriate…Injecting race into this conversation and into this tragedy, not only is not helpful, but it doesn’t help a continued conversation of justice and peace.”
Nevertheless, residents are bracing for elections on November 4. The most important race for voters is between Republican State Representative Rick Stream and Democrat County Councilman Steve Stenger, who are both vying for the St. Louis County’s executive position. Elections next April are also on new voters’ minds, with 3 open seats on Ferguson’s city council.
Despite a black majority, black voter turnout in Ferguson was significantly lower than white voter turnout in 2013. Only 6 percent of eligible black voters participated in municipal elections. In contrast, 17 percent of eligible white voters took to the polls. This trend persists in part because Ferguson’s white residents are older, and older voters generally outnumber younger voters come Election Day, according to a Pew Research Center study. Ferguson’s black residents also tend to rent homes, and voter participation strongly correlates with home ownership. The current political landscape also reflects a national pattern in which white leaders govern cities with black majorities.
But in light of Brown’s death, and a history of racial tension between white and black citizens, election day turnout will likely see a significant demographic shift.
Carimah Townes is a Special Assistant for ThinkProgress. She received a B.A. in political science from UCLA, where she also minored in cultural anthropology. While in school, she served as a festival planner and interned with the Office of Mayor Villaraigosa. Before joining ThinkProgress, she worked for the National Center for Lesbian Rights and interned with the Communications and Development teams at Vital Voices Global Partnership. Carimah is originally from Amherst, Massachusetts.

After an unpleasant publishing experience, BL decided to take control of her own fate and that of her books. She became a self-published writer two weeks before All Hollow’s Eve of this year. She enjoys writing. She loves using her writing skills to release her inner bitch through the characters she creates. Her novels and short stories allowed her to examine who she is, in black, white and various shades of gray. She can work out her ‘stuff’ through her characters. She finds it very liberating to do so. She vows to keep writing until she can’t.
MY FIRST REVIEW SORT OF….
INTRODUCTION TO FERGUSON & ERIC GARDNER ARTICLES