HISTORY & WHO TELLS IT 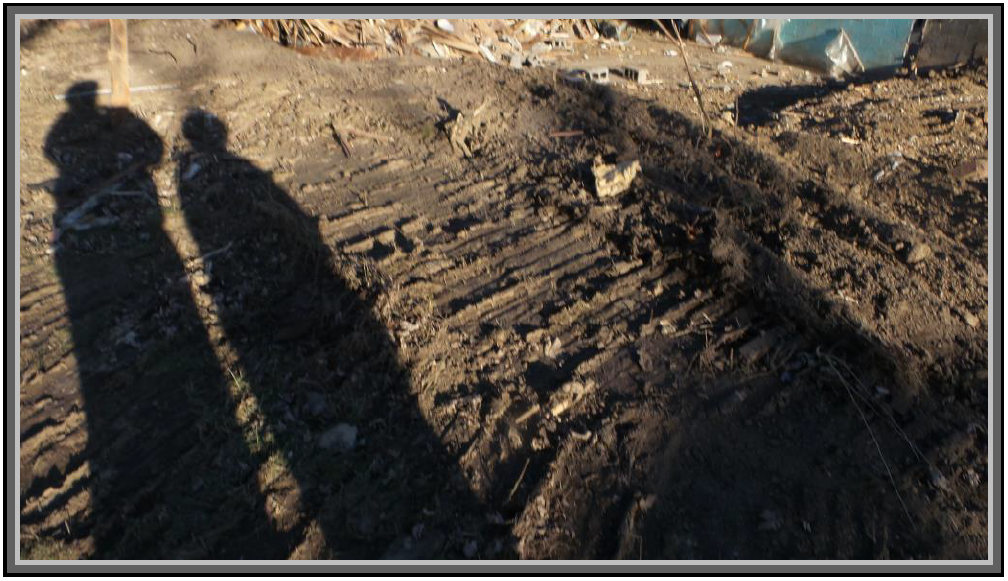 The picture above was taken in 2015 around Thanksgiving. The shadows you see are my mother and me. We’re watching what’s left of our home being torn down. It’s a complete surprise to us. We both thought when she sold it to a nice young white couple for a great deal less than she imagined, the house … our house would be there forever. It just wouldn’t belong to us any longer. Two other unique houses built by the first Black families to live in this township, just outside of Akron, Ohio, were gone too. My home and my history as well as the homes and histories of the two other Black doctors had been torn down and buried in the in the grassy earth.

Permit me to explain by going a bit backwards.

My mother sold our home eight years ago in 2010. She’d been trying to sell the ranch-style home for years. She couldn’t get the asking price for it. Since the area my mother lived in had been zoned for commercial as well as residential use, she thought it would be easier to sell her house. Unfortunately for my mother, Ohio was one of those states that suffered greatly from the housing crisis. Few people talked about it, but housing wasn’t the only crisis Ohio had. Prior to the housing disaster, the Rust Belt state lost thousands of factory jobs related to the automobile industry. Big name companies outsourced unskilled factory jobs to overseas venues with cheaper labor. Later, some of those jobs returned to nonunion states (called right-to-work states) when foreign car companies decided to relocate to the USA.

My mother said she couldn’t afford the fuel and heat costs on our five-bedroom, ranch-style home that sat on four acres of land any longer. She said it was too much house for her. She also hated living alone. She’d tried renting out rooms to students. It made sense because she lived a couple of miles away from Kent State University. (Yes, the same college where National guardsmen shot and killed students protesting the war in Viet Nam fifty years ago). The student rental thing didn’t work out so well. She complained it involved too much screening for a ninety-two-year-old woman to do. She decided it was easier to sell the house. She and I had looked at various housing alternatives years before she moved. She came away shocked at the amount of space she’d have to give up if she moved into a townhouse or a condo. She finally sold the house where I grew up six years later. She moved into a senior complex with assisted and independent living.

Now whenever I visit my mother and drive by my old home, all I see is rich pine green grass, sturdy trees too stubborn to die, and twenty acres of rolling hills. The only evidence of the first Black doctors who integrated the township are the asphalt driveways they built over sixty years ago. I hate that the land my father had to flimflam to gain ownership doesn’t look disturbed. It should have pockmarks for the ugliness we suffered to live in a place that hated us because we looked different. It should be barren for the hatred we felt from our fellow residents.
Who’s going to tell the story of how us Blacks, meaning my family and my two next-door neighbors, came to live in a lily-white community in 1954 after the Supreme Court ordered public schools desegregated? I guess that’s up to me now.

Stay tuned for History & Who Tells It (Part Two) in the following months.

BL Wilson
Connect with BL Wilson at these links:

After an unpleasant publishing experience, BL decided to take control of her own fate and that of her books. She became a self-published writer two weeks before All Hollow’s Eve of this year. She enjoys writing. She loves using her writing skills to release her inner bitch through the characters she creates. Her novels and short stories allowed her to examine who she is, in black, white and various shades of gray. She can work out her ‘stuff’ through her characters. She finds it very liberating to do so. She vows to keep writing until she can’t.
WHY I WROTE: I’m Your Baby Tonight but what about tomorrow?
COLUMBUS DAY